Holy moly. I cannot believe I am sitting down and typing out this blog post right now. Aside from taking a long hiatus from blogging while I was traveling, I am officially in my third trimester of pregnancy! My THIRD. What?!

Where has the time gone?

I’ve said this before and I’ll continue to keep saying it until it no longer holds true, I don’t even feel pregnant most days! It’s both a blessing and a curse. It means I don’t have any of the crazy, horrible symptoms but, on the other hand, aside from my growing belly, you can’t even tell I’m pregnant!

Last time I sat down to document my pregnancy I was about 20 weeks, or halfway through this journey. I had also just found out the gender of Baby Devine. This post will be dedicated to my second trimester and all of the fun things pregnancy has brought me up until this point.

So, what’s new on the pregnancy front…

My Second Trimester of Pregnancy

As I type this post I am just over 28 weeks pregnant, a.k.a. the very beginning of my third trimester.

If I’m being honest, I thought the third trimester didn’t begin until week 30 but I learned I was wrong, lol. The second trimester lasts from week 13 to week 27 and is often called the “honeymoon” phase of pregnancy. It’s called this because it’s when most woman feel their best while pregnant. I can definitely say that statement holds true, at least for me!

Toward the end of my first trimester (around week 11/12) is when those yucky symptoms started to fade, and I started to feel normal again. By week 13/14 I can say I felt pretty much like my normal self, or whatever normal was becoming for me. The weird food aversions and sensitivities to smells started to lift and my energy came rushing back. Overall, for the first half of my second trimester I didn’t notice much change.

As I got closer to the halfway point I began to get new symptoms and see a lot more changes in my body.

Around 16 weeks my belly grew over night and it hasn’t stopped since. For those next several weeks I waited anxiously to find out the gender of our baby. By 20 weeks we found out this little peanut inside of me was, in fact, a baby boy! I wrote a blog post all about our gender reveal if you want to go give it a read! By week 20 I was finally getting out of that awkward stage of “are you pregnant or just bloated”, LOL. 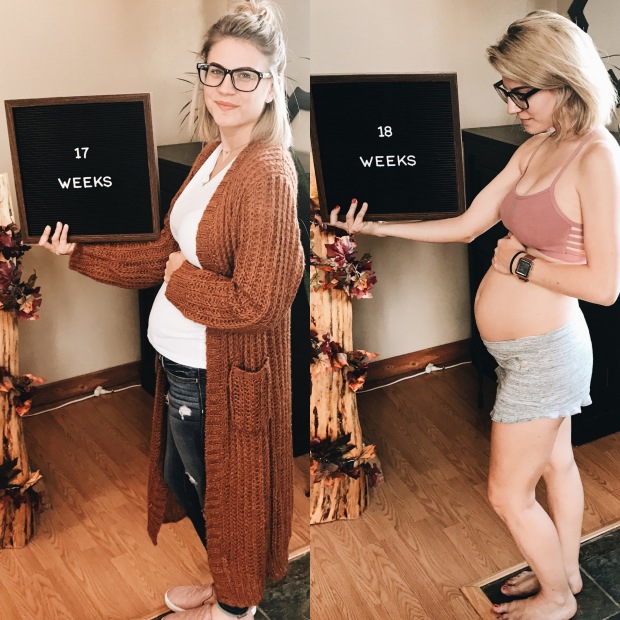 Once we found out the gender of our little dude things started to get more real, however, I still couldn’t believe I was pregnant (and I still can’t)!!! We started shopping and putting together our registry, and of course started narrowing down the list of boy names we liked. Sorry to disappoint you all, we have not picked a name yet. This process is so much harder than I thought it would be! When we do decide on a name I won’t be sharing it until he is out and about. For me, names are very special. I want to make sure we are picking a name we both LOVE, rolls off the tongue, and means something. I also won’t be sharing it because I want to know we are choosing it for him and not other people. Also, we most likely won’t decide until he is born anyways!

(A little side note: please respect this wish of my husband and I of not sharing the name. We don’t mind if you ask but we also won’t tell you and we hope you can understand that. Also, I ask you don’t try and choose our child’s name for us. We know you may have good intentions but when we tell someone we don’t have a name chosen yet, we don’t want to be pulled or pushed to choose a certain name, etc). 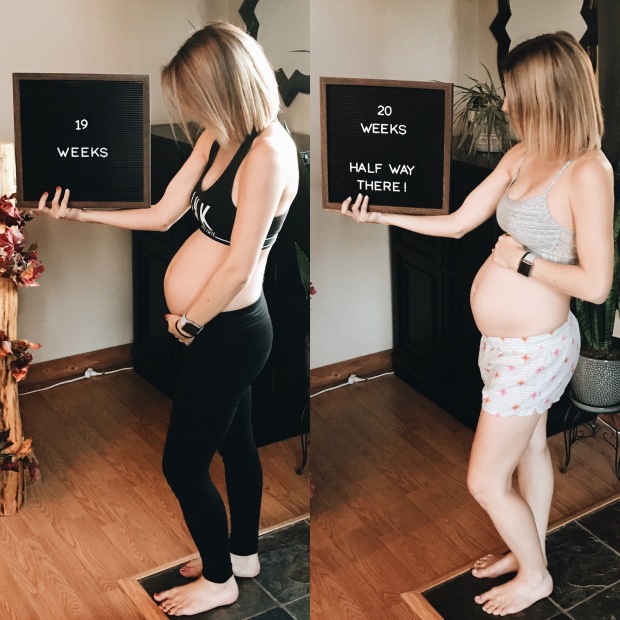 Now that I cleared that dying question everyone seems to have to know the answer to, let’s move on!

Like I said, after about 20 weeks I began developing not so fun symptoms. Symptoms that are very common, but I don’t see anyone talk about so, if you’re grossed out easily exit now.

One of the first symptoms of my second trimester that I wasn’t expecting was leaky boobs!!! Yes, I said it! My boobs are already leaking. I know this is normal and common but it was one of those things where I read about it but didn’t know many woman that experienced it until postpartum. It’s nothing major and I simply where the nipples pads breastfeeding mamas where to catch any leakage.

Back pain is another fun experience I get to have while pregnant. This started in the middle of my second trimester and comes and goes. It’s nothing too serious but it is a pain in the butt when you’re trying to relax! To help relieve it I use a heating pad, Epsom salt baths, stretching, and making sure I am not resting in the same position for long periods of time.

I have also realized how particular I am now that I am pregnant. There are just some things that HAVE to be a certain way, or it throws my whole day and mood off. For example, I have to have ice cold water with a splash of lemonade or else I won’t drink water. It helps relieve the nasty taste in my mouth I seem to frequently get, and it just makes me drink more water. Another thing I am particular about is my clothing, how it fits, feels, and looks over my bump. I’m also picky about my routine and sleeping arrangements.

Other fun symptoms include discharge, constipation, cravings, and random aches and pains. I wouldn’t say any of these symptoms are extreme because they come and go. However, they are there enough to notice! And that’s just the truth about pregnancy!

Seeing my belly grow has been the highlight of my second trimester as well as feeling him squirm around inside of me.

Around 25 weeks I would say my belly officially “popped” and I started to get the questions like, “when are you due?” and “how far along are you?”. I also found some maternity clothes I fit into. Other than that, I still pretty much wear my regular clothing in a size bigger!

Other than seeing my belly grow, I can feel him growing inside of me and it’s pretty cool. Just by the way he moves and wiggles around I can tell he’s grown so much. I believe from here on out he will gain around half of a pound until he’s born…crazy!

Okay, one more thing I wanted to touch on, and maybe I’ll do a whole blog post on this later, is weight gain. I expressed before how I wasn’t gaining much weight and I thought it was “bad”. Obviously, I was wrong and it’s normal for some women. I’m happy to report back that I’ve gained close to ten pounds this whole pregnancy! It’s definitely the heaviest I’ve been but I’m so happy knowing I’m healthy and so is my baby! 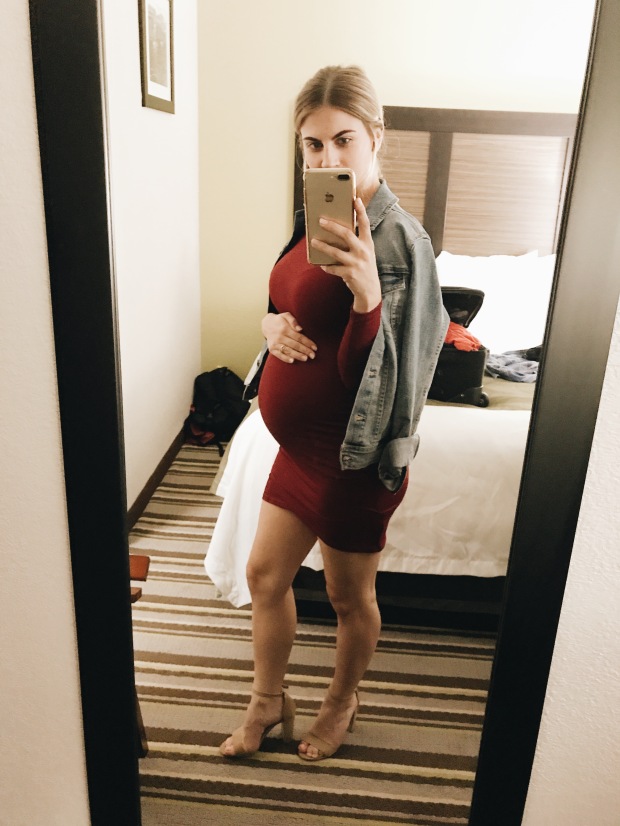 I’m going to end it here because this post ended up being much longer than anticipated. I want to leave you with this-

I want to remind any woman who is reading this that this is MY pregnancy. I am documenting my journey for my future self as well as to be open about this journey with other mamas. These posts are in no way to brag or even complain about my pregnancy. Each woman is different. Each pregnancy is different. Please do not compare yourself or pregnancy journey to me.

I also want to thank you for all of the love and support. I love having this outlet to document my journey and it’s even sweeter that I get to share it with you!

Watch my video breaking down all things second trimester here!

View all posts by Devon Jade